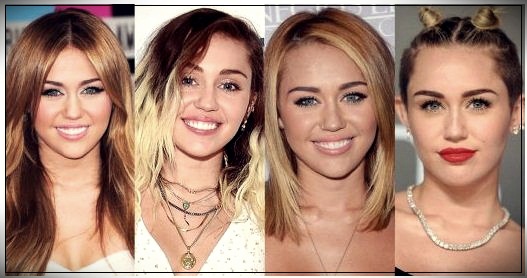 Since Miley Cyrus stopped being a Disney star she has had a series of quite daring changes, not only with her clothes but also with her hair. Since then no experience of change is too extreme for her. The singer went from having honey-colored hair with beautiful slings that made him look very abundant, to a crazy pixie cut.

But like a beauty chameleon who likes to experiment, the singer has made some mistakes with her hair. This brings us to December 2015, its darkest year. Fortunately he recovered and now he has only made good style decisions. This is a long journey through the history of Miley Cyrus’s hair.

The waves she chose to attend the 2018 Grammys were the perfect complement to her red dress.

Straight, unadorned hair gave her an elegant look in 2017.

Volume with his tall pony

It gave him a more youthful style during 2017.

A hat as a complement

When Miley had a bad hairstyle day in 2017, she chose a hat as a complement.

If you thought that glitter was a thing of this year, you’re wrong because in 2015 Miley used it to decorate her hair.

A bright touch to the pixi

When she attended the MET gala in 2015, she did it shining as only she knows how to do it.

Miley sported a short hair in 2015 during the Grammys, and it looked spectacular.

This was not Miley’s perfect hair, but it was what she wanted to wear in 2013.

In 2013 he lived a pretty unbridled time, and dragged his hair with it.

2013, the year of the terrible decisions in Miley’s hair.

The singer experimented with a hippie style, like that of Drew Barrymore in 2010.

This is how the world met little Miley in 2007.

Kim Kardashian, the new long hair for the fall